was reading joyce's blog just now . 165cm yeah joyce . are you sure =X LOL . really wanted to type what happened here . but you see . Joyce is my GOOD friend and i shouldn't ruin her reputation . those that want to know go and ask her personally xDD hehe .

okays . the long awaited PARTYWORLD PICTURES ! and of course not forgetting the VIDEOS !


singing by zi yan . he was really shy when i wanted to take a video . but he sing really very nice ! :DD 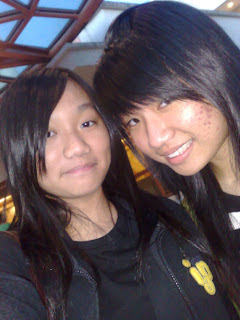 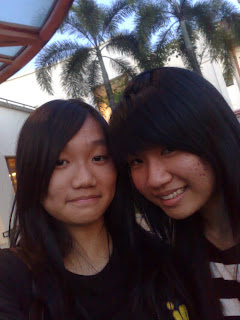 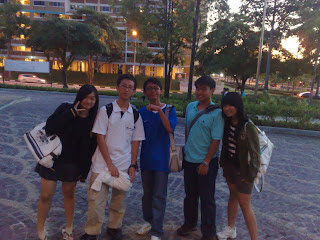 All of us after the singing ! jas and me agreed that WE DID NOT get enough of singing . 3 hours . i mean 4 hours is like NOT ENOUGH ! while walking home jas and me were like still singing :DD 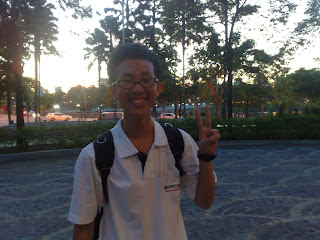 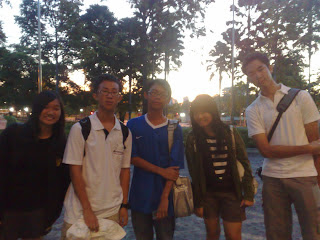 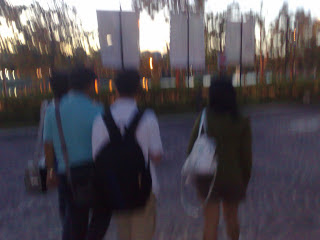 us going home ! so sad ! i wanted to spend more time with everyone ! especially jas ! missed the times of P07 ! :DD

yesterday night i was FREAKED out totally by a cockroach in my mum's toilet . i was just like going in when i saw this MONSTER with its feelers . oh my god . i shrieked and ran out of the toilet and the fastest speed . i think even faster than shuttle run . It was SO SCARY . i mean come on la ! its gross and all . my mum was like totally giving me the " lame " face . seriously . i live on the sixteen floor . for the cockroach to appear in my house it is really skilled in climbing or something .

Apparently i think it got shocked by my high pitch scream, when my mum went back to check with my maid . They could not find a trace of it anywhere . But i was totally freaked out ! i stayed in the living room which was really far from the bedrooms for like 3 whole hours till my mum achieved success of finding the cockroach .

In the meantime i was chatting on msn while my mum was finding the cockroach . Ling lan and shannon was having fun laughing at me . Ling lan was like saying come on la . its just a cockroach . whats so scary . you dam funny la you . LING LAN U DIDN'T SEE IT OF COZ U NOT SCARED LA ! Both of them said that maybe later at night it would be appearing in my room and worse off on my bed sleeping with me though they were in different conversations . Some people are just similar in some evil ways huh ! ><" Below is a photo taken before chinese lesson . 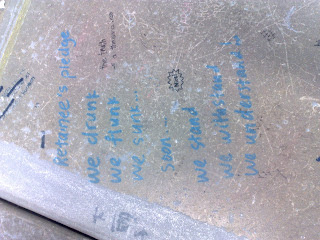 Oh yeah . For those who have not seen this before . Its the RETAINEE PLEDGE OF YJC ! scribbled on the table . For those that cannot see clearly it says :

We drunk,
We flunk,
We sunk,
soon ..
We stand,
We withstand,
We understand.

Cool yeah . not that i want to be part of them but its really cool xDD 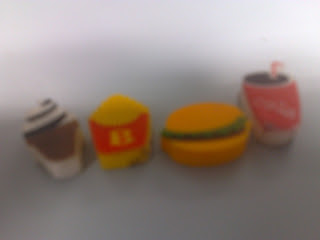 forgot when this was taken but its really cute ! yang jie's friend erasers ! 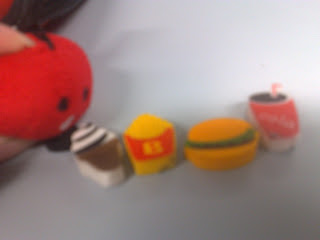 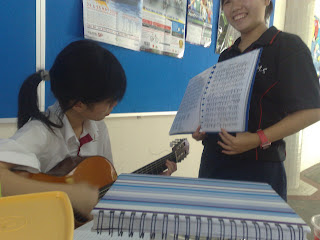 joyce playing guitar while jolene is acting as a stand =p 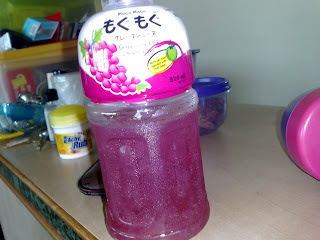 My favourite mogu mogu grape drink ! its really nice and everyone should try it . i think its only available in cold storage in d fruit juice section :DD

today morning before going to physics make up lesson in school went to have breakfast with weiqin at sembawang mac :D yummy ! a good breakfast is needed to focus in lessons !

we were late as usual =X for me i guess . since im always late ><" today's physics lesson was planned with much effort by mr phang . he had this game with slides and all . Who wants to be a millionaire but in physics aspect . so both classes 112 and 102 would compete with one another and the victorious class would get a box of chocolates from him .

at first we had the fastest fingers first to get the first contestant . Xue er sent in her sms first and she got the answer correct . But the point was she didn't even know how to answer the first question . In the end we sabotaged melvin and he exchanged places with her . Melvin got lots of questions correctly without using the helpline . I was glad that i was able to answer most of the quesions ^^

102 was really clever and they won us . congratz ! we learnt a lot today . in the end they still offered us chocolates to share . so nice of them :DD

after physics lessons, ibrahim and syaf were armed with the class list to ask jeannette and wei qin and some others who have not taken the class poll . with questions like who's the hottest guy in class and stuff . I was like forcing answers into jeannette's mouth and all =X hope the results would be out soon then we would post it in our class's blog ! :DD yeah !
Posted by hwee// at 6:51 PM