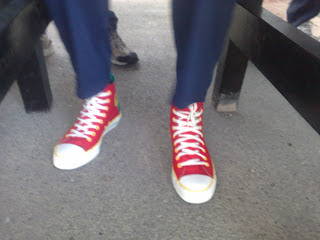 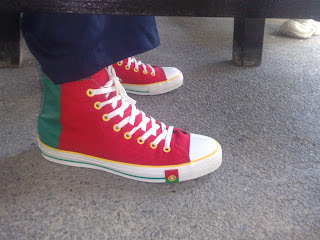 no . i ain't selling shoes . you DID NOT go to the wrong web . yupp ! featuring .. ASH'S SHOES ! his new converse shoes in fact . very attractive . we were walking to the physics lab in the morning . jeannette and me were like walking and walking then suddenly his shoes caught our eye ! seriously ! green and red . CLOWN SHOES ! first time i see it i was like " gross " . then after that actually its quite ok . quite nice isn't it . hahas . special in its own way somehow .

then was physics practical . husnain stole the ball bearing from the lab . well . he denied it saying it was yang jie . so oh well . they were playing floorball with this . jolene was like saying she want to join floorball too because its like damn cool . i was like " sure . you can be the ball ! " =X hehe !

one and half hour of break ! did my physics definition corrections . i proved the theory again that only 2 friends and teachers can read my handwriting . first person is ling lan . i think she sit beside me for too long already . she can read my handwriting perfectly . next is jolene . i was so shocked because my handwriting really SUCKS ! its scribble . and its really pathetic . its almost going to become a straight line already but she still can read it . great minds think alike don't they (: and of course teachers . i guess they went for some handwriting workshop before . the best thing was that once the teacher told me " eng hwee . don't worry . i have seen worse " i was like omg . who is that poor fella . mine is already CMI !

followed by physics lecture, computing lesson and then econs lesson . as usual jolene never fails to make me smile . she's like so funny . during lesson i passed her my bear hair clip . she was like looking at it and clipped it to her hair . so funny ! then i passed her another one . she split her fringe into half and clipped it up . so its like middle parting . so hilarious ! i was like daring her to turn around and show muthu ibrahim . she was like no way . why should i let them laugh at me . hahas . so crap ! =p

then was maths lecture . kinda boring ...

after that was gp lesson . sat beside melvin and yang jie . was like the best period of the whole day . on par with econs lesson . yang jie was dam crap . he really can make us laugh with all his idiotic comments . syaf and i were laughing non-stop . because we were talking about this passage about adults that never grow up mentally . then he refered children as " cute little young bastards " . dam lame la ! and when ms mok ask han wee to answer the question .

han wee : what am i supposed to do ?
yang jie : say your name, a little introuduction about yourself and ask her a question .

freaking funny la . the thing about him is when he jokes he doesn't smile . dam lame . he was like crapping like crazy . oh yeahs . peter pan , the boy who never grows up . because one of the sentence in d passage was saying that tokyo, london and uh .. what country was it ? =/ can't remember .. OH ! new york ! yeah ..

ms mok : they are full of entertainment and ?
syaf : girls .

thanks (: you're always helping me and all . i guess you don't want your name to be mentioned here since you have never tagged my board . oh wait . i think u did before . hahas . but still thanks a lot (: sun + rain = rainbow .. you should tag though xP so i can feel all better when i see it again ! hahas .. thanks again (: aren't you honored ! hahas .. this section just for you lehs ! :P

NOW I JUST HAVE TO WORK HARDER ! TO BECOME A BETTER PERSON ! NOT CHARACTER-WISE OF COURSE ! I MEANT STUDIES-WISE ! SMILES (:
Posted by hwee// at 8:28 PM