surprised . so touched . ying, yuan xi and joyce popped by my house just now to cheer me up :DD so shocked and happy ! popped by with lots of doughnuts . hahas . 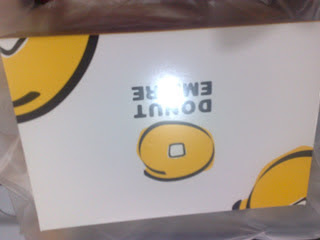 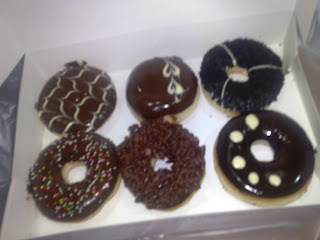 bought all chocolate ones ! :D because they knew that i love chocolate ! xD

really cheered me up .. they were laming me with their jokes and all . hahas .. so happy la ><" guess .. my clique still knows me best ? so easy to cheer me up . hahas ><" so happy to see them or something la .. cooped up whole day at home . quite depressed .. i mean . i feel happy to know that when im feeling down .. there's someone out there being concern and willing to spend a little of their time to just surprise me and make me happy :DD

jas was like saying that if it was her she won't dare to open the door because she look like crap at home . well .. my clique have seen me in all kinds of crap and shit ? lols .. spent so long together . if looks still matter then it won't really feel close anymore isn't it ? like .. your family ? would they even care if you look bad at home ? i mean the times when you look good you spent it outside . family and clique are people who would never mind how you look because they know that no matter what happens you are still the person they know . no matter what is your outer appearance .. they know you are still the same inside isn't it ? :DD

don't think too much yeah ? after thinking .. i felt that its really true . and .. i realised that as time passes by you will learn a lot of things .. a lot . and i meant A LOT .

today . kinda talked with ling lan .. opened up . told her what was really bothering me and stuff . well .. can say that im feeling better now . after not bottling everything inside . glad that she can understand my sentiments .. and of course . with the surprise from yx, ying and joyce . how can i not feel better ?

its not i want to say .. but im a perfectionist and .. i know that i know it right from the start . every minor thing even if it didn't mean anything to anyone else means a lot to me . i take note of every trivial thing . perhaps everyone would just say that im thinking too much and stuff . but when people starts to notice that its all this minor stuff that add up to a lot ..

for example . these minor stuff shows a lot .. and i mentioned before that these are things that people always remember . because it is so minor but yet you did it without even taking notice it already shows how important the person is to you so that you can just show these little care and concern without even knowing it yourself .

like when you are walking with your friend, she just bought something to eat . but her hands are full . automatically you will help her hold . you won't even ask if she needs help . you would just take her stuff for her . usually people thought that these actions are trivial and the person him or herself might not even remember these small concerns that he or she had showered on the other party . but i doubt that everyone is so dense that they don't even realise how nice they are being .

and even if like . there are 3 people around . A helps B . even though A is not helping friend C, C would also notice all these minor helpfulness that A has given . and of course it shows a person's character .

so .. it just depends on .. who is the person is to you isn't it ? if its someone close . you would then automatically, unconsciously love him or her .. love as in showering care and concern ..
Posted by hwee// at 8:59 PM