Today went out with dar to study ! Supposed to study . In the end was wasting time . Dar was eating peanut butter cookie . " DAR ! I DIDN'T KNOW YOU LIKE JAS SO MUCH ! "

Well . Double chocolate still rocks more :P After that chee wee came followed by jas with 3 chocolate oreos ~ YUMMY ! There was pearl in them ><" I hate pearls . I just don't like the chewy feeling . Feel so weird . Oh well =l I'm weird so what can I say ?

After that tried to get a new pencil case ! My current one is spoilt ! Darn .. The zip thing broke . So now I've a hard time opening it ><" Went around junction 8 ~ Looked at many places . Didn't fancy any . Well .. Guess its difficult to find something that I really like nowadays . Getting more and more choosy now .

Jas and me then went to out tuition centre . Supposed to meet with my tuition teacher in advance . He promised to treat us to Haagen Das because he was from italy . Thus he wanted us to change our preference of Starbucks to Haagen Das instead . We love to change our taste but .. the price is a difficult factor you know ! We are still students ><"

So in the end we went to PastaMania and have our favourite baked rice ! Till now I still feel that the " Ham and Sausage Baked Rice" is the best ! I love the cheese ! And today, our cheese was still in the melting stage . So it was really nice . When I took a bite, the cheese couldn't be broken . So I was pulling and all . I LOVE THE CHEESE THERE !

Oh yeahs . While we were waiting for food, suddenly jas was asking me if she heard someone singing . I was like " no .. " and giving the weird stare . This is scary . Seems like lately, a lot of people around me have been asking that . Some asked if I spoked to them or something . Weird huh . Hope its nothing though . If not it would be too much of a coicidence for so many people around me to keep hearing things isn't it .

Well . Then we went for tuition ~ Tuition was okay today . Our tuition teacher was asking us where were we . Apparently it was a wild goose chase ! We agreed to meet at the tuition centre but he got it wrong and instead went to the mrt station . We then finalised another date which was next saturday . But the thing is we quitted tuition today .. So next week would be .. hm ><"

Okays . During tuition . We started our lameness again ! We found out that our writing hands are fatter than the other hand .

Experiment Objective : Prove that the fingers of our writing hands are in fact not as slim as the other one
Experiment Equipment : A ring
Experiment Process :
1. Firstly, we tried placing the ring into the fourth finger of our writing hands which in this case was the right hand .
2. Tried taking it out .
3. Then we did the same thing with the left hand .
Experiment Results : Our theory was true . When the ring was in our right hand, it was so difficult to get it out . Our left hand proved easier . To double check, we even tried with other fingers including the thumb ! 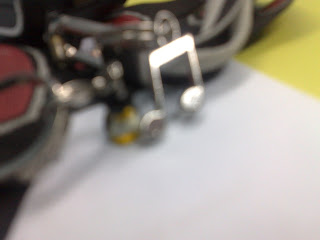 Unclear . My phone can't take clear pictures when the distance is near .. 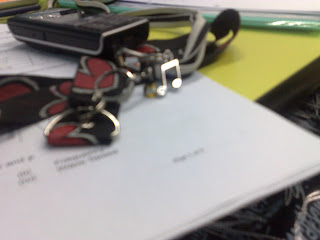 See the penguin beside the music note ? The music note is the one that inspired me :X Isn't my penguin keychain cute ? :D

Then jaslyn started drawing I think because when I was uploading the pictures from my phone to my notebook, I found some unknown photos :X 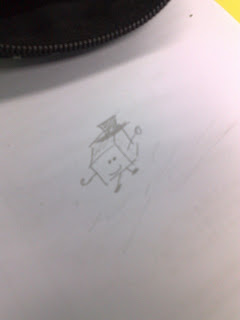 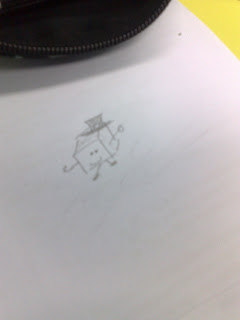 Another view of Mr Cube

After tuition, walked around and helped es's cousin find some stuff .

Then Jas tempted me to have subway ><" SUDDENLY . JAS HAD A SPLIT PERSONALITY ! She bought this one foot long sandwhich ! She ordered it and had different vegetables on both sides . One side was lettuce and the other was many other vegetables . 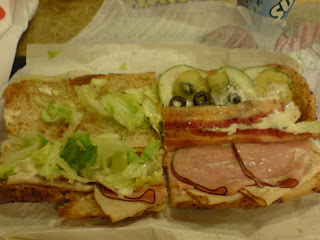 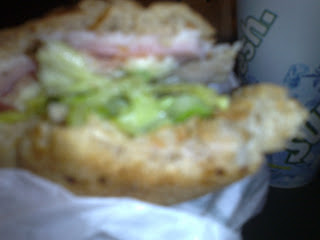 Her new twin name . Jas and Jac . Cool yeah . Ate ate ate . Had some barley . Jac said that the subway sandwhich was good and realsied that it was under 6grams of fat ! While Jas's one had more fats because she ordered more vegatables . She wanted to utilize the maximum fat content you see . But Jac argued that vegetables aren't fattening !

After eating, Jas turned normal again . And we walked around hoping to find a pencil case ! ><" I found a nice one . Too shiny for me I guess ><" Well .. Hope I can find one soon . Or else I have to try and survive with my current spoilt one :(

Okays ! Time to stop blogging . Its a long post already ! Doubt anyone would finish reading this word by word . hahas xD