Just finished watching wall-e . Its so touching ! Gosh . Great movie man ! And through the movie, I guess the really take home message is that if you don't want earth to end up like a thrash city, start recycling ! Guess I would start THE THREE R's ! :D

Love it totally ! The movie rocked . Wall-E is so cute . The show just fascinate me every second . Wall-E was classifying all the junk and recycling them . It was so cute . And being such a outdated robot, its cool that it found a hi-tech girlfriend isn't it ? The last scene was so cute . When they held hands ! At first I was still so sad and telling jas that wall-e lost its memory . But nope ! The ending was cute !

During the entire movie, there were a lot of scenes with hurricanes I think . This just shows how bad the situation has became . But at the last scene, they found this little plant still growing on Earth . Hence the take home message of the entire movie is that its still not too late if we start recycling now . Do our part . Global warming would still continue but the process would be slower I guess .

Today was the last day of computing practical ! Finally :D Though my program sucked and I know that I'm not going to pass, I'm still glad that its over . Not going to celebrate . Nope . Have to do my homework . Till now I've only completed a little of chinese and gp homework . Stuck in physics and maths . Have to complete them by this weekend or else I'm dead . And there's still project work ! Darn .. What holidays man !

After computing, went to slack with jolene and the others . Started playing with the webcam in jiakiang's laptop . Jeannette and me totally took over it . Started to invite people to watch us through msn . First was sahira . Then was jaslyn . I was like asking Jaslyn how to do physics question and all . It was so funny . Jeannette was so lame . She was like rolling all over the comp lab . I guess Jaslyn didn't saw it because she was busy solving the physics question .

webcam is so fun ! If I ever get a new laptop, there must be a webcam in it man ! I shall flood everyone's msn with it =X

We played little fighter 2 through lan . It was like such a long ago game . Played it last time with my brother . Can't remember how to play now at all . Am such a noob now . Jeannette and me were like laughing . We were just kind of "hanging out " in the game while jiakaing and mingsheng were killing the "baddies " .

After that dar came in to play too . They play it everyday or something . Know all the characters skills so well =X SLACKERS ! :P

After that guitar ! Didn't cut my nails so did not practise or learn whatsoever . Watched jeannette and dar playing .

Then went to mac and have fries :X So hungry ! Jolene bought the magazine again and we were having fun doing it . Jolene is just so funny man . She lifts my mood immediately with her jokes xD

Bro asked me to jog with him tomorrow . Depends on my determination . He said 5.30am . I have a feeling that he won't wake up :X I think I would die . Can't wake up or something . But hope everything goes well . Have been consuming too much fast food lately . Shall abstain myself from fast food for 2 weeks ! I need some exercise to lose these fats ! If not too fat then someone don't want me already :P

Next . Some random pictures taken by dar . No way am I going to put up mine . Its such an ugly angle for goodness sake . I've done everyone good by not uploading it up here and deleted it from my phone :X 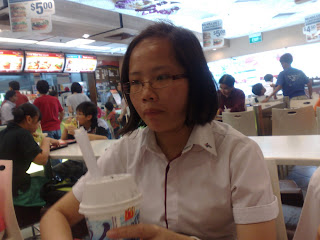 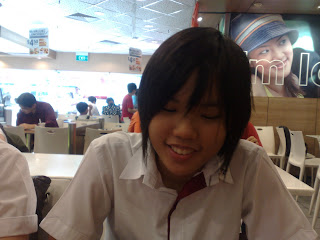 sometimes, you would just break my heart
but never understand why ..
Posted by hwee// at 11:33 PM