Well . Today was kind of RUSHED ! Nearly late . Rushed to school . Lucky wasn't late . What a good way to start off the week and term with a detention . During assembly, watched this sexuality talk video . Coincidentally, the female lead's name was jolene and guy was alvin . Melvin was like making fun of jolene the whole day . So hilarious . 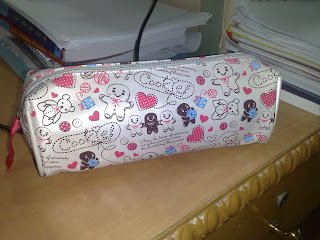 Isn't it cute ? If you dare to say not cute, jas and cheewee will whack you till your flat because they spent sooo long shopping with me to finally get this pencil case .

Well .. Quite free today during free period because I've completed most of my homework . Only left gp summary . I hate summary . Its like ahh ! Ms mok would always underline most of it and write lifting all over it . Darn . Maybe we should suggest to MOE that we don't need it anymore . Because we've already done it in secondary school :X AQ is enough to kill here .

Chinese was fine . Kind of boring . After chinese ran to the bookshop to get the long overdued notes :P for projectwork .

Project work . FINALLY ! We got our aspect right . Thought we are going to struggle forever . So now its quite okay . COME ON PEOPLE ! LETS AIM FOR AN A AND GET A 10 RANK POINT safely in our pockets :D

Computing ! Thought I won't need to face the coursework questions anymore . Then came the blow . Mdm myl said that we need to finish it as daily work . Like omg ? Darn . I don't even want to have a second look at it . I was struggling all the way . Pestering chee wee beside me . Chee wee was so angry because he found out that it was a little error that screwed up his question 3 . If not he would haven gotten the entire program right . Oh well . Exam pressure huh ? Thanks ming sheng . Was pestering him . He was hanging around chee wee so I dragged him to help me . Helped me figure out some DUMB errors . If only I've REALSIED THEM EARLIER ! I might stand a higher chance of passing my practical . DUMMY !

Econs ! SURPRISE TEST ! Darn . jolene and I were stucked . Couldn't remember how to do at all . Market failure like ahh ! The weekly test just passed and I got a high mark and here now I'm forgetting how to draw the graph at all .

PE was funnnnn like crazy . Had table tennis :D

PC/CT . We were having a sexuality education kind of thing . Mr ho was like going through the points . Jolene commented that it was the FIRST time in her life having a guy teacher going through this kind of topic . Couldn't really exactly remember what happened but one of the questions was that if you should have sex or something . Then jolene was like no way . like for what ? Then yang jie replied " Baby bonus .. blah blah bonus .. " We were laughing like mad . Then another part was when jolene and the guys were debating . Girls get all the troubles and not guys because we are the ones that get pregnant so guys have nothing to lose ! Husnain was defending and saying that " heys . we experience stress okay . " jolene rebutted " what stress " then I forget what happened in between and yang jie butted in saying " but its more difficult to say no to sex " Ended us laughing again . It was so funny .

Oh yeahs . Mr ho went to Eygpt and got us souveniors ! Grains of fine sand shipped ! LOL :P Kidding . He got us bookmarks . Really nice ones . There were 3 kinds . I got the one with the alphabets then exchanged with yang jie . He's was a cat . So cute . So I " forced" him to exchange with him :X 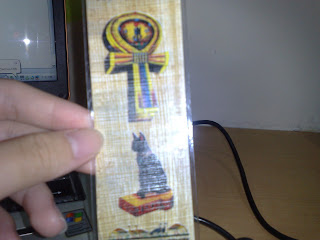 Okays . Special preview :X Mum was looking at the past photos . Then I went to have a look and had a laugh at it . Laughing at myself of course . Last time we were so cute and comical . 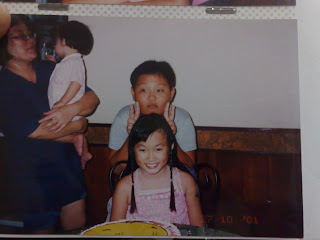 HEYS . I CAUGHT YOU LOOKING AT MY BROTHER AND SAY HOW CUTE ! LOL . Because thats what I did . So cute ! My brother was sooo cute last time . What happened :X And you are right . I'm freaking tann that time because I was taking up swimming lessons every week . 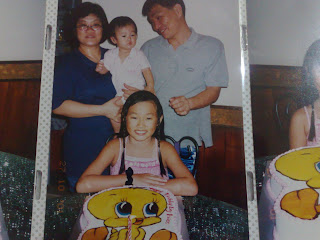 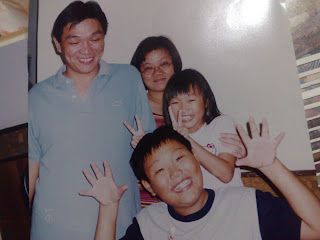 CANDID PICTURE OF THE DAY TO END OFF :D SMILES PEOPLE ! This is the best picture . True smiles . True laughter . When would we ever take them again ?